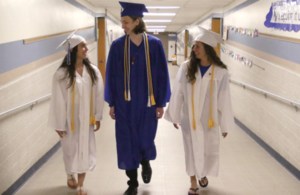 Connellsville Area School District graduating seniors returned to their elementary schools to “walk the halls” in their caps and gowns earlier this week before Friday’s graduation ceremony.

Indy M. Lynn, assistant high school principal, said she came up with the idea for the senior walk after she saw it on the Internet last year.

When we announced the idea to the seniors last Friday, Lynn said “many were excited to do it.”

“We notified the elementary principals who enthusiastically helped to make it happen,” she said.

After graduation practice on Tuesday, Lynn said seniors visited their own elementary schools and “walked the halls” in their caps and gowns while the elementary students watched.

Lynn said the principals played the “Try Again” song from the movie “Zootopia” over the speakers as the seniors walked.

“The feedback from the elementary principals and teachers was very positive,” Lynn said.

“They were also able to talk to the children and answer questions for them,” she added. “Most importantly, we hope it inspires the children of our district to keep working toward graduating high school themselves.”