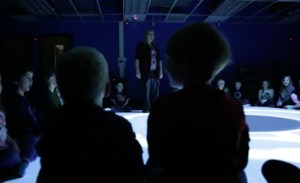 Phillip Martell stresses there are opportunities for any district to upgrade its tech capabilities if it can rely on measurable outcomes and find savings elsewhere.

After joining the Connellsville Area School District as a chief financial officer, Phillip Martell found the district facing a $6 million deficit. Through steady work, Martell and the district constructed a three-year recovery plan that involved structural reorganization of the district's business side, and with the resources made available, Martell looked to SMALLab Learning technology as a way to cost-effectively promote student equity in the classroom.

“We all know that students learn at different levels. The SMALLab (Situated Multimedia Arts Learning Lab) really brings equity to the educational process in a classroom setting,” Martell, who became superintendent of the district in 2016, said. “This has been one of my easier transitions into technology.”

In describing how teachers integrated tech tools into Connellsville classrooms, Martell stressed the importance for school leaders to consider measurable outcomes that can be assessed and verified for all of a district's actions or programs to ensure that these approaches were benefiting students. Administrators should also try to conduct these actions at a low enough cost so as to free up resources for other expenditures like the SMALLabs Martell championed.

“I believe that 90% of the people getting into these things don’t intend to misuse funds, but they’re not looking into the measurability outcomes on the back end,” he said about the need for financial accountability, asserting that administrators needed to reconsider presumptions that state and federal funding might increase in the foreseeable future. “Those out there who think there’s going to be more funding, it’s not going to happen. So how do we evolve and take the resources we have to increase student achievement?”

Located in Fayette County, PA, about 50 miles southeast of Pittsburgh, the school district spans 250 miles of rural area, enrolling 4,600 students — a 50% drop from 2000 due to the area's hard-hit manufacturing businesses.

Martell said he was familiar with SMALLab Learning prior to joining the Connellsville district and decided to incorporate it into classrooms when he became superintendent. The lab began as a University of Arizona research project, utilizing game- and inquiry-based instruction in an environment that boasts it is "invisible" for students engaged in it. Martell said funding and utilizing SMALLab was initially a challenge, but the positive reaction he saw in the classroom had buoyed the approach.

“The kids enjoyed it. They’re having fun,” he said. “Traditional classrooms are gone, and for those continuing to fight that…sometimes, in public education we have to think outside of the box. That keeps students invigorated and involved. And in my mind, it brings equity and a level playing field for your high-achievers and low-achievers.”

In addition to seeking out new tech tools or trends that could boost positive outcomes for students, Martell said it was important to remain innovative and cost-conscious while transitioning into utilizing higher-tech tools and spaces. Martell spoke about a push in the district to install makerspaces in a number of schools, replacing or modifying school libraries in those facilities.

However, instead of making new hires, Martell worked with already-employed staff on retraining, in addition to reallocating resources to help make those transitions as seamless as possible. Additional innovations are on the way, with every student in the district set to be supplied with a Chromebook this fall and Martell saying the district is substantively invested in staying current with the Google platform.

Martell said he believed methods for seeking measurable outcomes for administrative initiatives was something that should be better incorporated into superintendent training and development nationwide, arguing that data should correlate to the funding, or lack thereof. The lack of funding cannot be the sole predictor of poor outcomes, Martell said.

In the coming years, Martell intends to support educators who work to integrate the SMALLab Learning system into their curricula. Reminiscing upon the previous years after joining the district amid fears of bankruptcy, he said the most difficult moments came with the gradual pace of five-year budget plans, knowing that the resulting growth measurements can take time to come to fruition.

"That’s been my biggest challenge,” he said. “And I’ve come to the conclusion that that needs to be done and you’ve got to crawl before you can walk."