All Connellsville students to receive computers 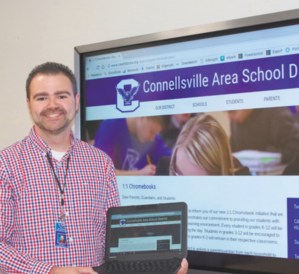 Each student in kindergarten through 12th grade will be receiving a Chromebook laptop computer.

Technology is going beyond the classrooms and will be going home with most students in the Connellsville Area School District this year.

Each student in kindergarten through 12th grade will be receiving a Chromebook touchscreen laptop computer.

“In grades K-2, the devices are going to remain in the classroom. They will not be going home,” said Kevin Ghost, the district’s technology coordinator.

Ghost said the touchscreens are perfect for the younger learners who may not have developed the fine motor skills to use a keyboard yet, but the Chromebook offers both, so the technology is ready when the student is.

District Superintendent Phil Martell said the district had planned to phase in the computer technology over a three-year period, but the partnership with ABM which offers the district guaranteed energy savings, allowed the district to purchase enough computers in the first year for all students. The district has purchased 4,417 Chromebooks.

In addition, a 65” interactive display is in each room, with the capability to connect to the internet, student or teacher computers, video players, telephones and other devices, as well as allow teachers to write notes on any of those media or to use it as an electronic chalkboard with unlimited pages.

“It’s today’s technology,” Martell said. “Every student in this district should have the same opportunities.”

Ghost noted that with all students having the laptops with free cloud storage, every classroom becomes a computer lab and if there is a problem with a computer, there is no downtime. A malfunctioning computer can be swapped out with a working model with no loss of information, apps or materials since each student’s settings, programs and documents are stored in the cloud online.

Ghost said that if a student doesn’t have access to the internet at home, programs they are working on can be downloaded at school for offline use. The computers also have built-in cameras and microphones.

Before any of the computers are handed out, however, parents or guardians must attend an informative meeting. Those meetings will be held Sept. 11-16, running 30 minutes each, starting between 6 p.m. and 8 p.m. depending on the first letter of the parent’s last name.

“We want the parents to understand what we’re handing them and what direction we’re heading,” Ghost said.

Eventually, the district will be moving to electronic versions of their textbooks.

“Their texts, their reading for pleasure, all comes through this one device,” Ghost said, noting that the district has increased the number of titles available to students through e-books on the Overdrive application.

“We’re ahead of the curve now regionally,” Martell said. “We got a lot of help from the staff. We don’t have any elementary librarians any more. They’re media specialists.”

More information about the 1:1 Chromebook program is available on the district website on the technology page.