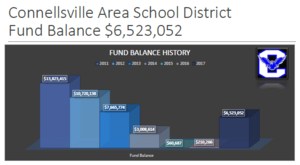 A tight budget and strict adherence to the budget is being cited as the reason for a significant improvement in the financial position of the Connellsville Area School District.
BY CHRISTINE HAINES

Business manager Robert Geletko presented highlights of his annual financial report to the state at Wednesday’s school board meeting, noting that the district started the 2016-17 school year with a fund balance of $210,266 and increased that amount by $6,312,786 by the end of the school year. With the $1.49 million assigned to the Capital Reserve Fund, the total fund balance comes to more than $8 million.

Geletko said about half of the fund balance resulted from a one-time payment from the state under the PlanCon program for reimbursement for past construction projects. Geletko said the state had owed the district the money for the past five or six years, but just this past year released the funds.

The district also received one-time funding from the settlement of a lawsuit and the receipt of money from flood insurance.

The district saw other savings by offering its own cyber school program, attracting 152 students back to the district. In the previous year, the district had paid cyber school tuition to outside agencies for approximately 185 students, accord to Superintendent Phil Martell.

The cyber school savings were estimated at $800,000. It costs the district between $10,000 and $11,000 per student if he attends an outside cyber school, and as much as twice that if the student is in a special education program.

“Part of my job in this school district is to run it as a business. You can run a school district efficiently and still meet the needs of our staff and our students,” Martell said.

The board voted to assign $500,000 of the fund balance specifically for future capital improvement projects. Some of the money has already been spent to upgrade technology in the classrooms, including Chromebooks for all students.

Wednesday marked the last meeting as board members for Dr. Paul Means, Gary Wandel, Jay Fox and James Duncan. Fox was absent from the meeting.

Wandel said that counting his time as a student and as a teacher, he has spent 55 years in the Connellsville Area School District.

Wandel, who has been on the board for the past eight years, said it is imperative for the board to provide the best education possible for the students.

“The closing of buildings in the correct way has been of benefit to our students as well as to our taxpayers. We are getting ourselves on a sound financial footing,” Wandel said. “I’ve been blessed to be a part of all of this.”