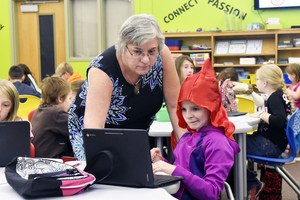 Rebecca Dix has seen a lot changes to school media centers over her 37-year career in public education.

The media specialist at Springfield Clifford N. Pritts Elementary School in Normalville, in the Connellsville Area School District, watched the rise of technology education in the library to rival book reading, as school curricula has placed greater emphasis on critical thinking skills.

Students love the technology-based learning that occurs in a 21st-century media center, she said.

“When I first began, technology just wasn’t a part of our world (in the library). But as it has become, I’m still at heart very literature based, so I’m intentional about tying what we do with technology to literature,” said Dix.

“I understand, as I’ve learned with the technology, it’s important for the students to be able to think on their own. Critical thinkers are what we want, and I find that they like the challenge even though they may get frustrated (at times).”

But for the veteran librarian, the basis of critical thinking lies in exercising the imagination through reading.

“I believe it really helps to build their imaginations, causing them to become critical thinkers because they’ve been exposed to so much more,” Dix said. “They’re not limited in their own little world of what they know. A book can take them many other places.”

For her commitment to education and enriching the lives of students, Dix was chosen by officials at Connellsville as the district’s Herald-Standard Excellent Educator for 2017.

A native of Indian Head, Dix began her career as a librarian at Derry Area School District in Westmoreland County in 1981, shortly after graduating from Shippensburg University. After a couple years at Berlin Brothersvalley School District in Somerset County and another stint at Derry Area, Dix returned home to Connellsville, where she has taught for 30 years.

Formerly splitting time between Springfield and Clifford N. Pritts elementary schools before the closure of the latter earlier this year, Dix has run the libraries at five district elementary schools, including as many as three at once.

David McDonald, assistant to the superintendent for the Connellsville Area School District, said despite her tenure, Dix has the energy and drive of a first-year teacher.

As technology has entered the library — Connellsville Area has recently equipped all students with Chromebooks and all classrooms with Boxlight interactive display panels — Dix has embraced the transition.

“As times in education have changed drastically, she has changed right along and not lost a step and strives to stay ahead of the curve,” said McDonald.

The school’s technology/computer lab teacher, Dix dedicates two days a week to collaborating with teachers in the classroom and assisting them with technology-based projects.

“I like to help people. It’s who I am,” she said. “I’m here to help support the curriculum, so when they have a need in the classroom, it’s my job to assist them as I can.

“I don’t have all the answers, by any means. But if using a technology tool helps them, or providing them with books that give a mentor text to help them teach a lesson in their class, I have those resources and I can say, ‘Here you are.’ I enjoy doing that.”

But for Dix, there is still no greater satisfaction than seeing the looks of excitement and anticipation on students’ faces as she read them a story.

“It’s really seeing their imagination at work,” she said.